After all, if you’ve been using a hammer and someone gives you a pneumatic nail gun to build your house, why wouldn’t you use it?!

You’ll be told that writing poetic lyrics is not something you should do if you want to be a professional songwriter.  Keep it simple and general enough for everyone to understand.

But what does that mean, and how do you know when using poetic language or poetry as lyrics is working?

Well, there are songwriters out there who use poetic language very well.  They manage to create accessible songs with vivid imagery and use three or four syllable words, and they win Grammy Awards!

One of my favorite songwriters who uses poetry as lyrics in their songs is Lucinda Williams. She grew up around writers and poets, but she has always been a songwriter.

I would argue she’s one of the best songwriters we’ll ever hear in our lifetimes. Her lyrics are full of poetry, but they’re accessible. And that’s the trick to it!

One of her best is “I Envy The Wind” from her album Essence.

How does she make poetry work as lyrics?

You’ve probably noticed that the key here is keeping things simple.  Because the song limits the complexity around it, the poetic lyrics can flourish, and so does the song.

Poetry As Lyrics: “I Envy The Wind”

Because her lyric could stand on its own as a poem, we’ll look at the song as if it’s a poem.  Once that exercise is complete, I’ll relate her approach back to songwriting

I Envy The Wind

VERSE
I envy the wind
That whispers in your ear.
That howls through the winter.
That freezes your fingers,
That moves through your hair,
And cracks your lips.
That chills you to the bone.
I envy the wind.

VERSE
I envy the rain
That falls on your face.
That wets your eyelashes,
And dampens your skin.
And touches your tongue,
And soaks through your shirt,
And drips down your back.
I envy the rain.

The Lyric As A Poem

Keep in mind, as I run through this, I’ll talk about the lyric as if it’s a poem.

So, Poem = Song and Stanza = Verse in this first section.

Williams uses an anaphora, or the repetition of a word or words at the beginning of successive phrases, to create a sonic effect linking the stanzas through the poem.

The use of a device like an anaphora helps to not only link stanzas, but also, in this case, has a built in metaphor.

Each of the elements of nature provides her with a strong baseline to use as a metaphor when describing her emotional relationship with the other person in the poem.

The anaphora simply allows the strength of the metaphor to evolve during the course of the poem. 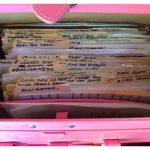 As a result of her strong metaphor choice, each stanza is a progression in the way the speaker feels about the other person:

What encompasses everything more than the sun?! We revolve around it – it’s the center of our universe. And – why wouldn’t someone want to be another’s sun? To be the thing that makes each day livable and joyful. Wow.

Throughout the poem, Williams uses metaphors to figuratively illustrate her emotional state toward the other person.

And, each element has many faces – for example, rain can be destructive if it’s a flood or beautiful if it’s a single storm squall rushing over the Rio Grande gorge at sunset.

The trick with a metaphor is making sure it doesn’t break down as you progress through your poem. Breaking down results in a disconnect to the intent of the metaphor, or comic representation that pulls your reader out of the poem.

If you end up with wind that’s shaking hands with an ex-lover, or a rock crying, you may have gone too far. The visual in your head for both of those is probably pretty comic, which is disastrous when you’re trying to impart a serious meaning.

What Makes This Poem Work As A Song?

Williams could have written this song as a story line similar to Brandy Clark’s “Crazy Women.” After all, being angry is pretty common after a break up. But, she didn’t use a storyline plot.

Instead, she chose to use metaphors and have a first person perspective conversation with herself.

This is an extremely emotional song.  While she could have run through a fairly common story, the thing that makes the song unique is the fact that she didn’t.

The metaphor allows for a direct, emotion connection to the things being used to speak about her feelings. And that’s important because there’s not a single emotion running through the course of the song. The speaker’s understanding of their own reaction to the situation/person evolves throughout the song.

A standard storyline plot is difficult to shift across three emotional sets without leaping through time to show the emotional progression within the context of the story.

How The Anaphora And Metaphor Work Together

Using metaphors allows for a more “mixed” approach to the central song idea: I had you, I lost you, and I miss you every day.

By choosing elements of nature we all interact with, she made the song accessible as a listener.  It’s easy to follow because you don’t have to figure out a complex connection between her imagery and what she’s trying to say with it.

And, she chooses metaphors combined with verbs that are realistic, even if you don’t follow the metaphor, so you don’t get lost in the song.

howls through the winter – check

chills you to the bone – check

drips down your back – check

All very literal, but all easily work within the metaphor to amplify the emotion of each of the stanzas.

A storyline song outline gives you a path to follow. By choosing a repetitive device like an anaphora and simple elements for the metaphor, she’s achieved a simplicity to the song.

So, in essence, she’s solved for the reason you would use a more commonly occurring storyline song plot and outline.

Repetition is one of the key elements in creating a memorable song. By repeating “I envy the . . .” at the beginning of her verses, Williams gives herself the opportunity to:

By using an anaphora, she solves for the elimination of the chorus, but keeps the strength of the repetition it would have provided.

She also turns the “refrain” normally seen with an AAA structure on it’s head by knowing her poetic devices.  Using an anaphora gives the song a bit of a refrain twist, without being distracting in addition to sounding unique to a listener.  She also reinforces the refrain with the last collective refrain or B section.

One of the things you’ll notice is that Lucinda Williams’ language isn’t particularly “fluffy.” Per her usual lyric and approach with writing, she’s very precise.

Much like her father, who wrote for a general reader, her language and descriptions are easy to follow.

Through the nuanced use of verbs in each section, she’s able to create the emotional impact of the song one verse at a time.  By introducing the metaphor pattern from the title directly into the first verse, the listener is following her intention immediately.

While the last stanza/verse sounds like a frame, using the first stanza/verse over again to create an ending to the image or thought, she actually summarizes the prior stanzas/verses.

By combining all of her “envies” into a single refrain, she runs through the entire emotional state created by the metaphor and during the song.

Because the song’s core is a simple, traditional sounding chord progression, the lyric stays front and center.

Her accompaniments often focus the majority of riffs and motif tags outside of the lyrical structure, which provides the listener with song dynamics without muddying up the lyrical space.