Janis Ian dropped an example of her mechanical royalties statement on FB, which gives you a great idea of what streaming pays out for your songs on their service.

Keep in mind, the music modernization act will increase rates on average 44% (which is a great start) – so we’ll go ahead and do that math too.

And, I’ll take a look at the math using some “hit song” numbers just to provide some context.

All of the below math assumes you own 100% of the publishing and 100% of the songwriting.  We’ll have some future posts that get into more complicated splits. But for now, we’re going to keep it simple.

She is also the only publisher – so she owns 100% of the publisher’s share, which represents the other 50% of the song’s royalty payout.

As a comparison, lets look at the olden days for sales and radio airplay when it was completely different and radio stations were media companies vs. “services” and sold ads to consumer product companies to generate revenue and paid for “content” or songs to attract listeners.

37,433 plays had the streaming companies being radio stations would have looked like this:

Streaming pays out at 0.48% of what a songwriter used to make!

That’s a 99.995% pay cut for delivering the same product to the same audience for the same business purpose by the buyer (radio stations – sorry – streaming services). 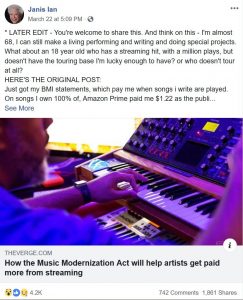 Payouts for each for the first week of streaming looks like this:

How about some fun?

Let’s compare to another made up example using some industry math and assume everyone is getting paid as if the streams were radio air plays.

Granted, 23 million is about double what the most-played songs in history total is (“Every Breath You Take” at 11 million).  So let’s look at one that’s a bit more realistic:

Johnny Cash’s “I Walk The Line”